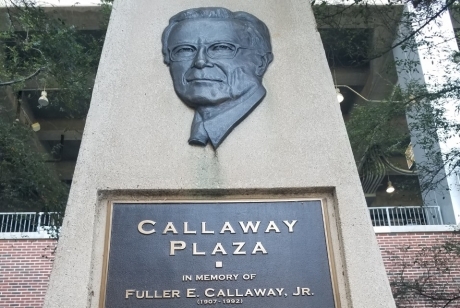 On April 26, 1996, Georgia Tech President G. Wayne Clough presided over the dedication of Callaway Plaza. At the end of his remarks (included in full below), President Clough read the text of the plaque that sits below the bas relief of Mr. Fuller E. Callaway (1907-1992).

Fuller E. Callaway Jr. received his bachelor's degree in textile engineering in 1926. After a year of further study, he entered the textile business and for the next few years served as an officer of several textile companies controlled by the Callaway family. Fuller became chief executive officer of Callaway Mills at the age of 28 and was its guiding force for more than three decades. In 1947, he announced that he was taking a ten-year leave of absence to get a fresh perspective on what was important to him. In 1958, he came back as chairman of the board and served in that capacity until the mills were sold to Deering Milliken Inc. in 1968. He organized Callaway Foundation, Inc., a grant-making private foundation in 1943. In 1946, he and two other Tech alumni established the Georgia Tech Research Corporation. His personal gifts and contributions from Callaway Foundation, totaling millions of dollars, have funded professorships, scholarships, and numerous facilities for students on the Tech campus. Callaway was an internationally recognized leader in the textile industry.